skip to main | skip to sidebar

The Barcelona Take Away - MWC13

it was cold and windy and where I stayed, you could hardly be outside. Not much better weather than Stockholm. And MWC 2013 felt a bit similar, not much better than before. "Same same" sort of feeling.

The show moved from Fira at Placa Espagna to Fira Gran Via, next to Ikea and not far from the airport. The venue is far better as it was very spacious, indoors and never felt crowded even it was the largest ever (aren't they all?) and thus easy to find the companies you were looking for - though you couldn't find Google and Microsoft. Nokia, on the other hand, is back again and they had a very nice lounge. They didn't fill their booth with phones, phablets and gadgets, instead provide room for informal meeting and made it very human (it couldn't be because they basically had nothing to show, could it?). 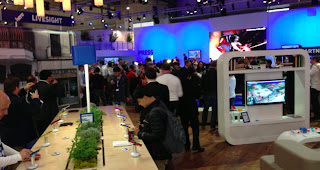 And seriously, MWC is all about to see and be seen, an extreme of networking where you start during breakfast (8am) and continue past midnight, every day.

Otherwise, Phablets was the buzz of the town. Is it a phone? Is it a tablet? Is it a notebook? With devices like Samsung Note 8.1, ZTE Grand Memo and Huawei Ascend P2, the term phablet was coined to mark the cross-over for small tablets with phone functionality and yes, the only thing I miss in my iPad is the phone functionality so maybe Samsung and others have come across a lucrative niche that Apple is ignoring (on purpose). Engagdet has an interesting article on the phablet subject

And to spinn on phablets (even have its own wikipedia definition), there was an explosion of accessories for phones, phablets, notebooks ranging from Hello Kitty to more normal canvas folders for phablets. Krusell assigned half their booth to Motörheadphönes.

For quite some time, I've been part of and followed the mobile OS and I really didn't think that Firefox OS would stand a chance. While testing phones with Firefox OS installed, it's obviously still early days and reminds me about Qtopia. But seeing the traction, understanding the operator paradigm, the ease of use for webRTC, non-locking of app stores yet screen applications, leveraging HTML 5; Firefox OS may have a chance of becoming the third Ecosystem - instead of windows phone. Mozilla's strong presence in desktop supports the use of Firefox OS in mobile and could it just easily be adapted to non-mobile devices, such as a TV or Infotainment system in a car, then it certainly would have a strong opportunity to be a viable option for both device makers and application developers.

HTML5 though would provide a sluggish experience. I have a hard time believing that optimizing Gecko for mobile and build an OS around the web engine  will provide a better experience than a native OS where e.g. Android has native OS and a Java engine for apps. From an app perspective maybe acceptable performance can be achieved but not from an OS angle which will really affect the uptake on high end devices, where performance strangely enough really matters. The gap should be smaller as time goes by with the entrance and optimization of e.g. WebGL.

What's speaks in Firefox OS' favor is Mozilla as a non-profit organization and its sole focus on open source. Both advantages can also be seen as disadvantages as its needs to compete and succeed is less apparent from its competitors: Apple and Google.

The one that a lot of open source geeks, including myself, hopes to succeed is Sailfish OS by Jolla, a finnish startup that based its operations and software on MeeGo/Maemo. But with no support from any vendor or operator and an OS that also begins to feel outdated, it would be really impressive if they manage to succeed. Bear in mind, the first market to target is the most competitive market in the world, the Chinese mobile market, which is driven by a number of Android spin-offs and the most successful is Xiaomi.

A bit of a surprise, it seems like Sony is making a comeback in the handset market with a strong line up of phones, phablets, tablets and notebooks, paired with state-of-the-art accessories and Sony Home Networking/TV and of course, Playstation. I do think Sony is staged for a comeback; trimming the company, reducing number of sites, focusing on Tokyo and Lund for R&D and betting on standard Android should make Sony a strong contender. They should be able to increase their quite low marketshare and maybe become #4 or 5 in sales revenue (not volume), maybe already 2013. Only 1.7% in units shipped in Q4 2012 according to Gartner.

Another company that keeps impressing and will move fast forward is Huawei. Latest move is to setup an OS R&D in Finland and they recruited a Nokia Research Fellow, Mikko Terho, to run the center in Helsinki. I have strong hunch that Huawei will try to develop some kind of in-house lightweight OS based on open source standards to give them control of their future and also differentiate somewhat from competitors. It will be quite exciting to see what kind of products Huawei might ship in 2014 based on 'Huawei OS'. Huawei has also recently setup a modem R&D center in Lund.

Watch and behold, Huawei will soon rank top 3 for mobile phone shipments as I expected they will be dominating low end android handsets shortly.

Walking around in Hall 3 passing Qualcomm enormous booth, all of sudden an equally sized booth appear, by AirWatch! Heard of them? I actually did as I was asked to go and visit them but for a company in the mobile device management space, it was over the top. But that was the whole point. According to company representatives, they wanted to make a statement to show who is really the market leader in MDM.

I have never seen a 3D printer in real life before, but in the Nokia booth they set up a 3D printer to print Nokia covers. Amazing technology and if pricing comes down, it will definitely change how people can innovate and try new ideas on their own. Larger quantities and/or higher quality will probably for quite sometime require professionals and professional equipment, but there are tremendous opportunities for e.g. repair and replacement services where fixes can be done in no-time vs ordering from the other part of the world. 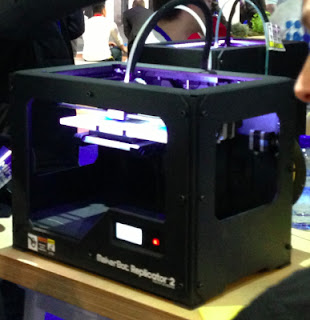 My own personal takeaway is the little thing below which is an HDMI dongle running Android 4.0 and Airplay. Plug into to a TV, download the remote control to your smartphone and bang, you have a fully functional Android TV. Now, that's maybe not what you need but the opportunities that you could explore with this kind of setup is quite interesting. Just use Android as an application platform and you can design apps for the really big screen. The device should hit the stores late this year. 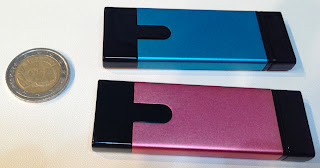 There was a lot of app developers but I didn't have the energy to check up all app developers. There are more and more for years that goes and with limited screen real estate, mobile apps or smartly designed mobile websites are the way forward.

Next year, more of the same but soon trends like wearable computers (aka smartphones, tablets), google glasses and other ways of interacting with your phone hub may start to show up and will change everything, again. On the mobile network side, the laws of physics do limit how much speed and capacity can be distributed and new network paradigm will have to be deployed in order to handle gigabit transfers of data to devices. Maybe we will see gigabit transfer stations in the same way as we have electric stations for bikes and cars? I don't small cells is the best way forward for that concept. There are too many challenges. Instead, the mega-blast point centers for infinite data transfers on extreme close range could solve the issue more practically than WiFi, LTE and small cells.
Posted by Unknown at 17:23

Well, this is my own private view about what is going on in the mobile or should i say, the mobility industry in Asia & Europe (aka Nordic countries). I delivered that view as a result of my ground-breaking job in Nokia promoting the use of Qt & MeeGo to the Asian Ecosystem while working closely with operators to figure out the future.. I have been there (Asia) since 1997 and now.. I am out of there.
Back to my roots, Stockholm and Kungsholmen, it's time to venture into something new and new it'll be though the same roots - mobile, software and Asia